In phonics we have been practising blending and segmenting. Our favourite part of phonics has been, ‘Fred in Head,’ the children have to blend the word in their head and say it together as a class. We used hungry monsters ‘Obb’ and ‘Bob’ as an activity, we fed ‘Obb’ nonsense words using tweezers and ‘Bob’ ate real words. 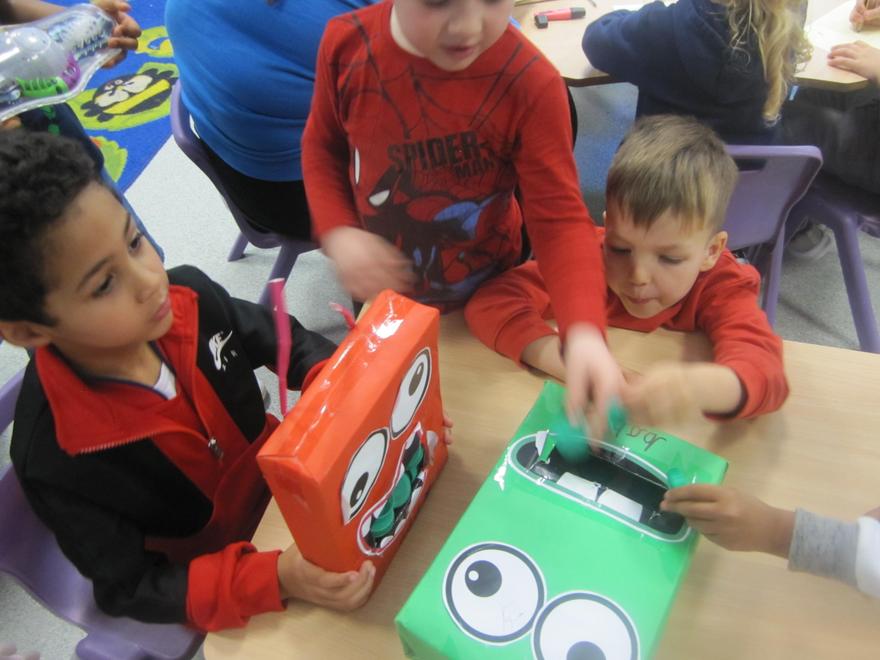 Our practise and revision of the sounds has been evident in our independent writing. We have enjoyed writing about ‘The Hungry Caterpillar’, insects and bugs, ‘Superworm’ and ‘The ‘Bad Tempered Ladybird’.  We have used ‘Fred Fingers’ to write letters and graphemes to spell words. The children are using more red words in their writing and it is fantastic to see them writing impressive sentences. We have read non-fiction books about mini-beasts and also found out interesting facts on the internet. Looking at these books inspired some children to write their own booklets about bugs!

We have been playing many games using ten frames and Numicon to help us consolidate our learning from last term, involving numbers eleven-twenty. One game included filling two ten frames to make twenty. The children took turns to roll a dice and remove the corresponding number of counters. They had to reach exactly zero to win the game. During the game, we were able to reinforce mathematical language and concepts, for example, one full ten frame and five counters on the second frame add up to fifteen altogether. We extended the activity in child-led activities using sunflower seeds to fill ten frames to make teen numbers. We linked maths to our topic by counting bugs and insects and matching to the correct numeral. 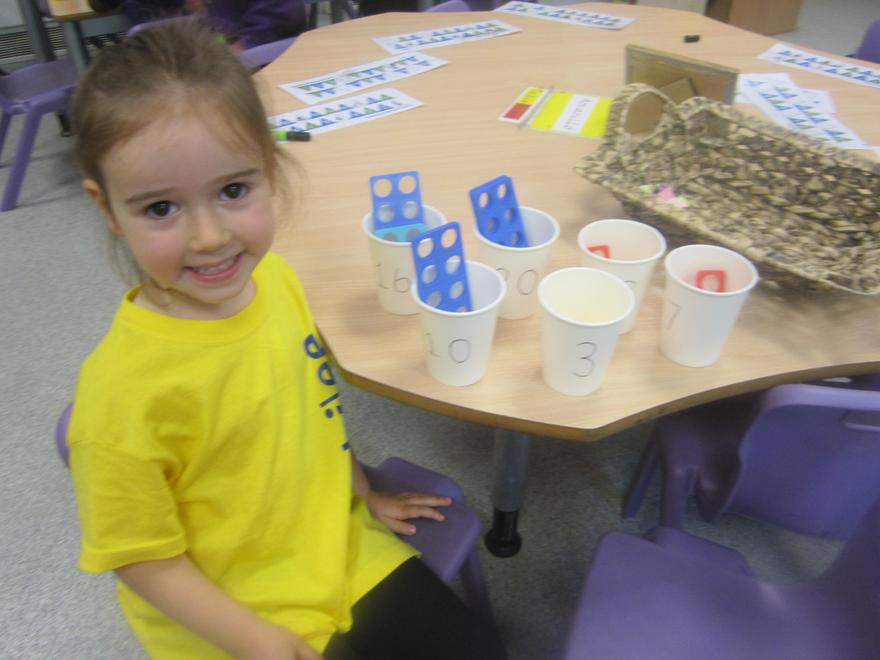 As well as our topic being minibeasts, we spent the last week of term focusing on the celebration of the Queen's Platinum Jubilee. To celebrate this special occasion the children constructed Buckingham Palace using blocks and Lego. The children also drew and painted pictures of the Queen.

We looked at what life was like for children 70 years ago, we discussed and wrote about what was the same and what was different to life now.

To mark the Queen’s 70 years on the throne, we were very excited about our own Jubilee Picnic at Gatland Park. This inspired us to write our own menus, design our own Jubilee cakes and write invitations to the picnic. 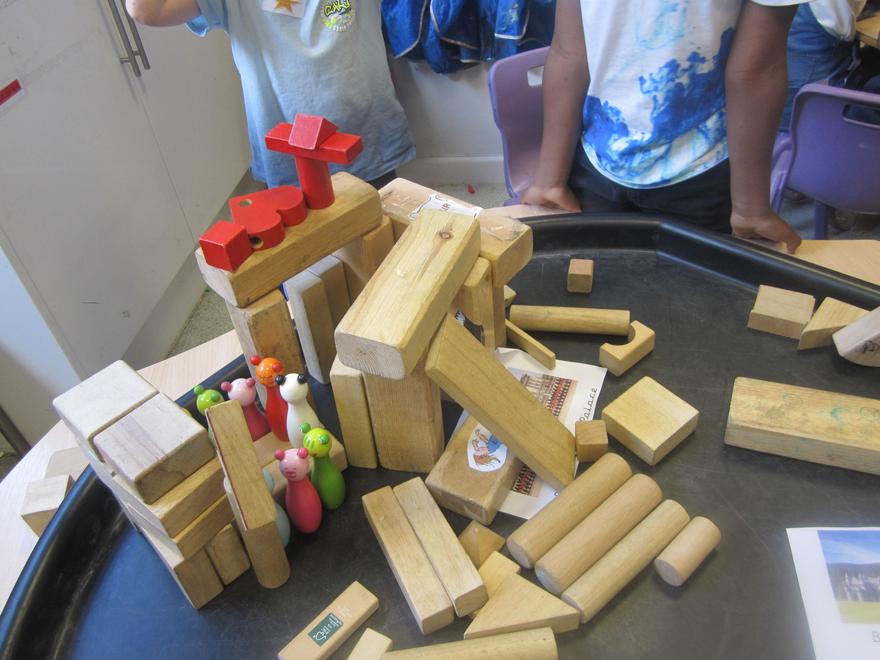 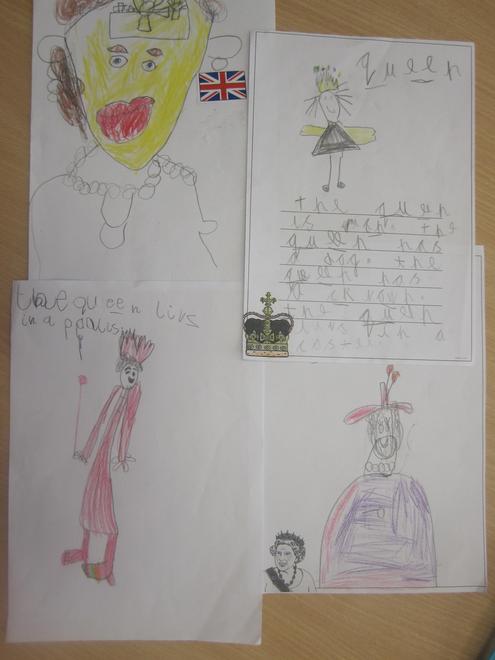 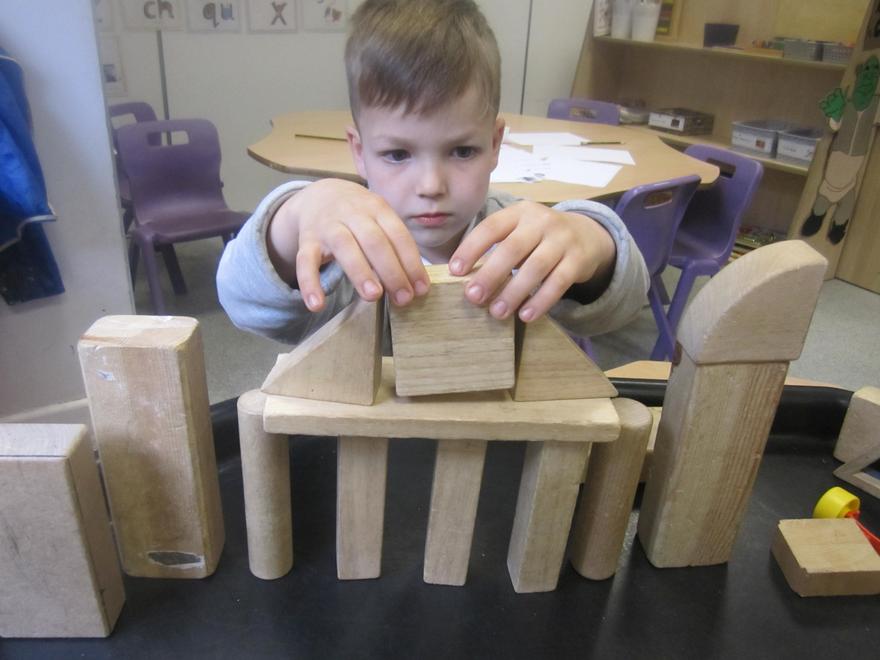 This term in maths we have been learning about the composition of nine and ten. 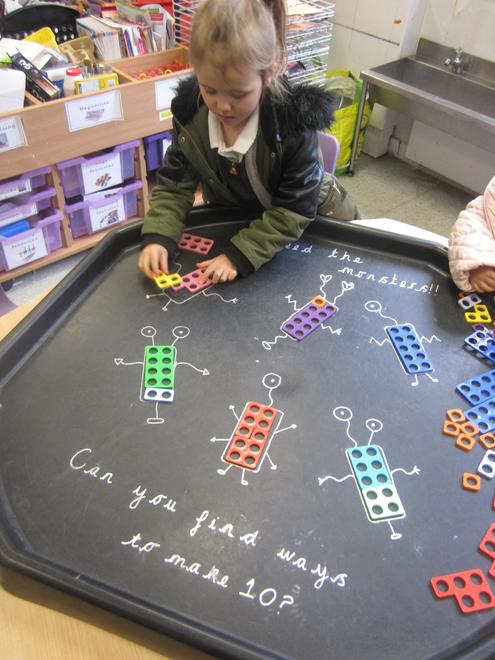 We fed the bear his porridge oats, having to check the number on the spoon to make sure he was given the correct number. We have also been printing with 3D shapes into playdough, to investigate which flat shape the faces of the 3D shapes make. We have been creating and recreating repeating patterns using pom-poms to make buttons for the Gingerbread Man.

Scottish Owls have been using vocabulary for number, such as: more, fewer, altogether and combined. For shape space and measure we have been using mathematical names for ‘solid’ 3D shapes and using language to describe the properties of the shape such as flat, curved, edges and face.

Our work this term has been themed around Traditional Tales, including, ‘The Gingerbread Man’, ‘Goldilocks and The Three Bears’ and ‘Little Red Riding Hood’. We have been painting the characters, acting out the stories and building scenes from the story in the construction area. We really enjoyed learning a fun poem about Goldilocks and The Three Bears called: ‘Hey there Big Bear, what do you want for breakfast?’

We have been playing lots of games together like, ‘Duck, Duck Goose’ and ‘Red Bear, Blue Bear’. The games have been helping us to learn to take turns and develop our friendships. We have been revisiting our high five rules and reading stories about kindness. The children had lots of ideas about how they can be a kind friend such as: sharing toys and asking children if they would like to play. 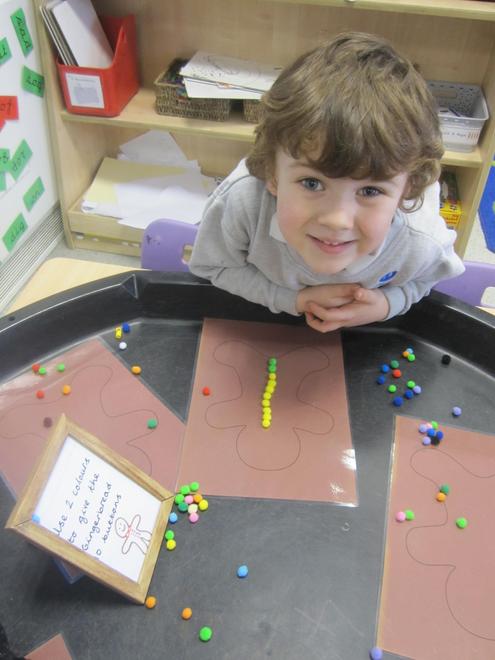 In English this term we have been using our phonic knowledge to write simple sentences using capital letters, finger spaces and full stops. The children are learning to remember all the features they need to write a super sentence, including re-reading what they have written to check that it makes sense. We linked our writing with the topic and the children wrote describing words for how the characters felt in Goldilocks and the Three Bears. They wrote ‘WANTED!’ posters for Goldilocks. 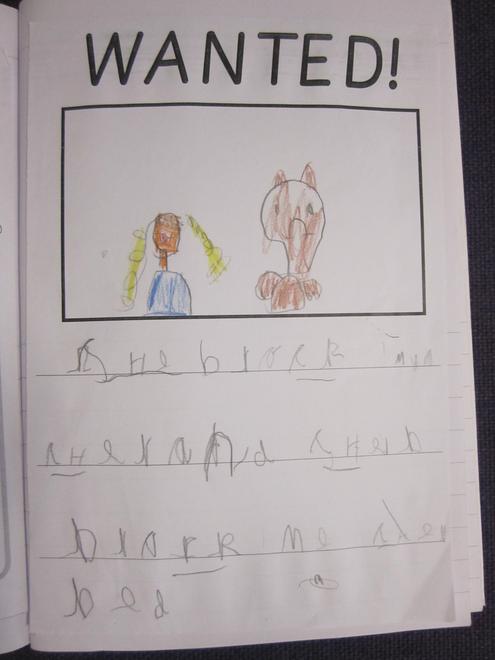 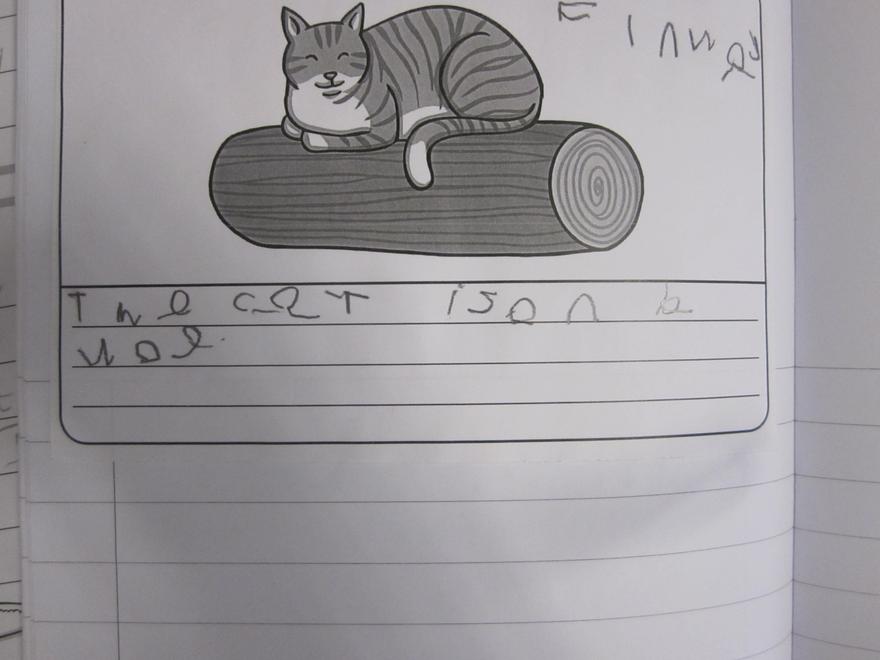 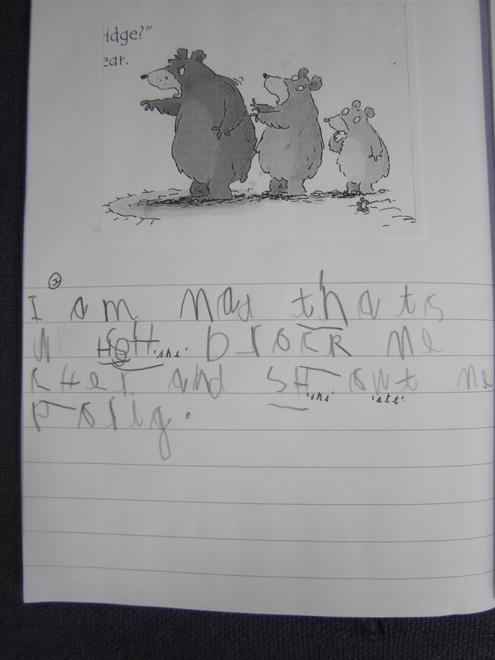 This term, the children have been looking at the composition of the numbers: 6, 7 and 8. They have been combining groups together and have been introduced to the part- whole model. They have measured and compared lengths, using beanstalks that they have grown themselves. Look how tall they have grown! 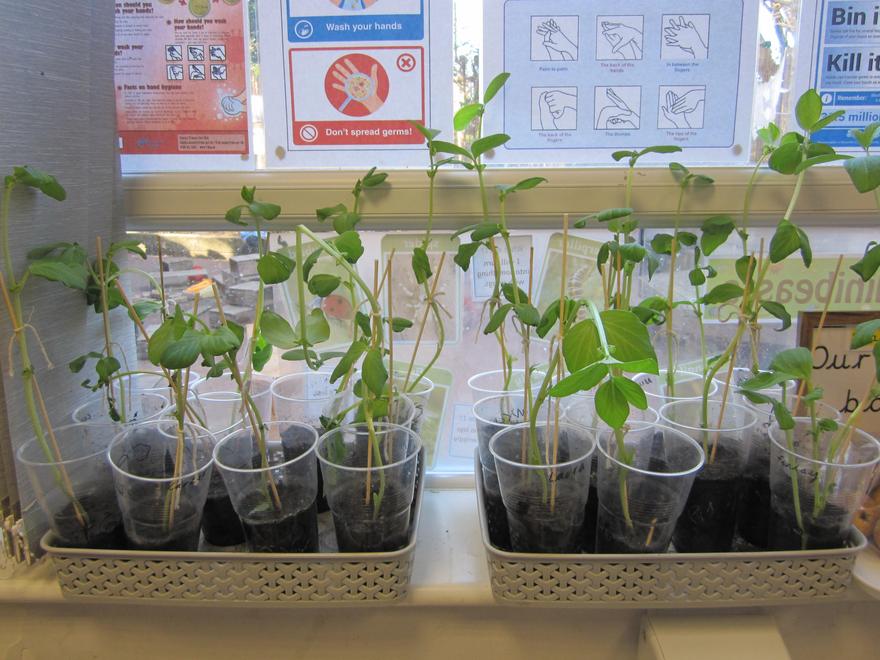 We played a fun game where we rolled a dice and pretended to climb up a bean stalk, we took a step forward on the numbered leaves each time we rolled the dice.

We have been exploring capacity using bottles, funnels, and containers. We had lots of fun, used mathematical language in our observations and managed not to spill too much!

Scottish Owls have been using vocabulary such as: full, empty, more, fewer, together, total, longer, taller and shorter. 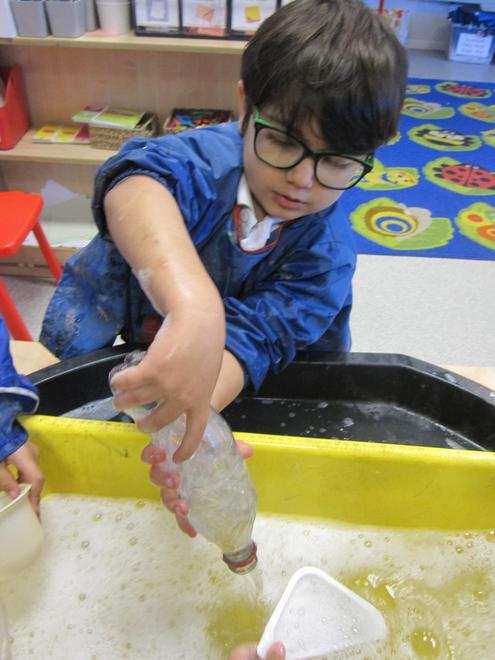 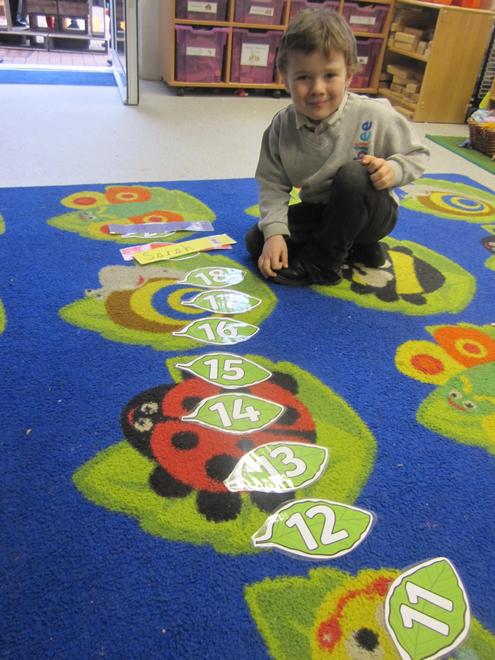 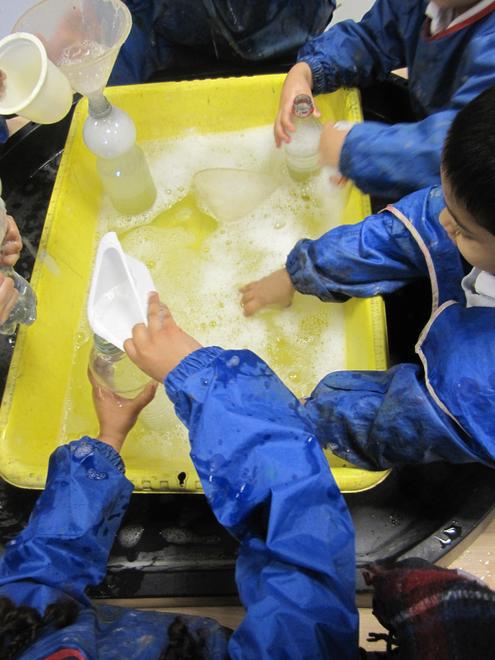 Scottish Owls have been consolidating their skills by blending and segmenting sounds that they have learned, using double letters to make tricky and alien words. We have been playing a fun game with ‘Pop up pirate’. We have to read a word and each place a sword, in turn,  in the barrel, until the pirate pops up!

As part of our topic, we read, ‘The Three Little Pigs’. We have been inspired to make houses using our construction skills and have been labelling our pictures and models. We made finger puppets and masks and have been retelling the story using expression on our stage outside. 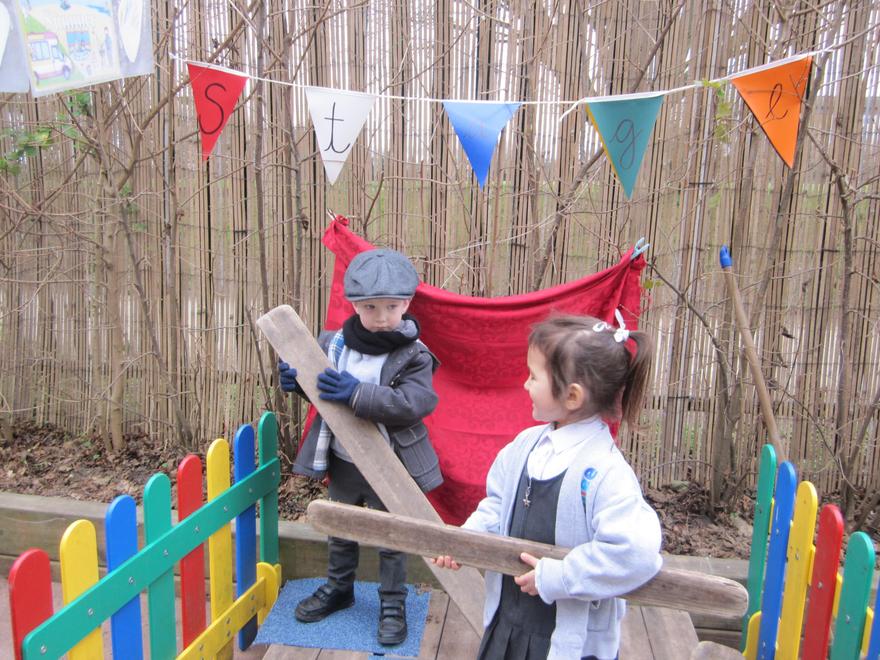 It has been fantastic seeing the progress that the children have made in reading and writing.

As part of our topic, we have been baking bread, to experience first-hand what it was like for the ‘The Little Red Hen’. In the story she had to bake the bread herself, without any help, we worked together and each had a turn to mix and knead the bread. The most exciting part was watching the dough rise and of course, tasting the deliciously cooked bread!

We have been investigating how materials change, for example, the bread dough changed when it cooked, the seed changed when we watered it and water turned to ice when we put it in the freezer. We made our own ice lanterns, the end result was very impressive.

This term our learning has been themed around woodland, we have enjoyed reading the, ‘Gruffalo’, ‘Stickman’ and ‘We’re Going on a Bear Hunt’. We have thought about our favourite part in the stories and used lots of props to retell each story.

A lot of this term has involved movement, music and dance because of the Nativity rehearsals. The children have learnt how to copy actions, move rhythmically and keep to the beat. It has been a great way to improve gross motor skills, which supports their co-ordination and will even help to improve their handwriting. 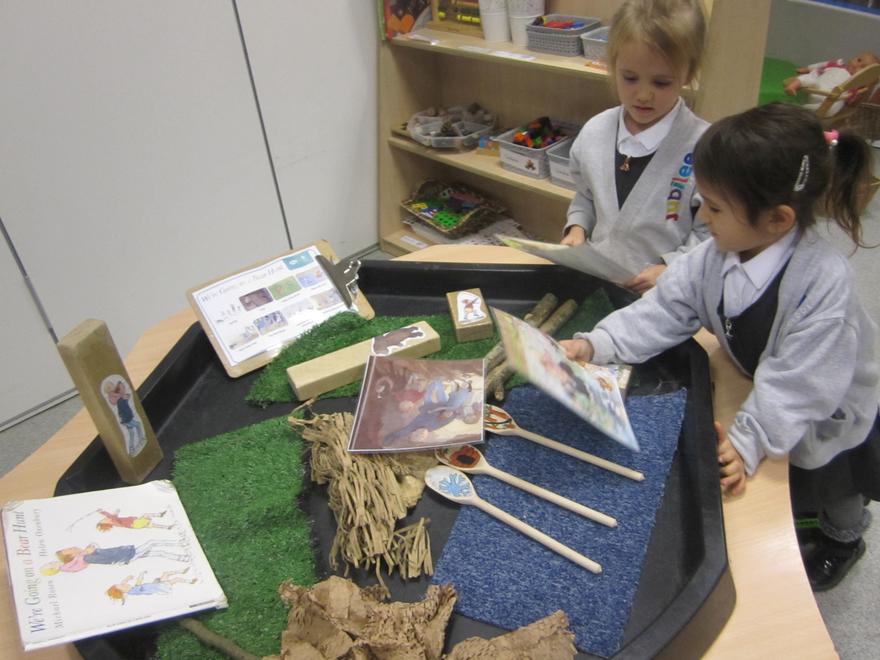 The exciting books we have read inspired lots of mark making and writing. The children are using the new sounds they are learning in phonics to help them write initial sounds and simple words.

Fred-Elf on the Shelf has been causing all sorts of mischief, and helping us to learn to read simple words, phrases and sentences: including writing on bananas, writing on the table with paint and spilled salt, and making a mess with mud! 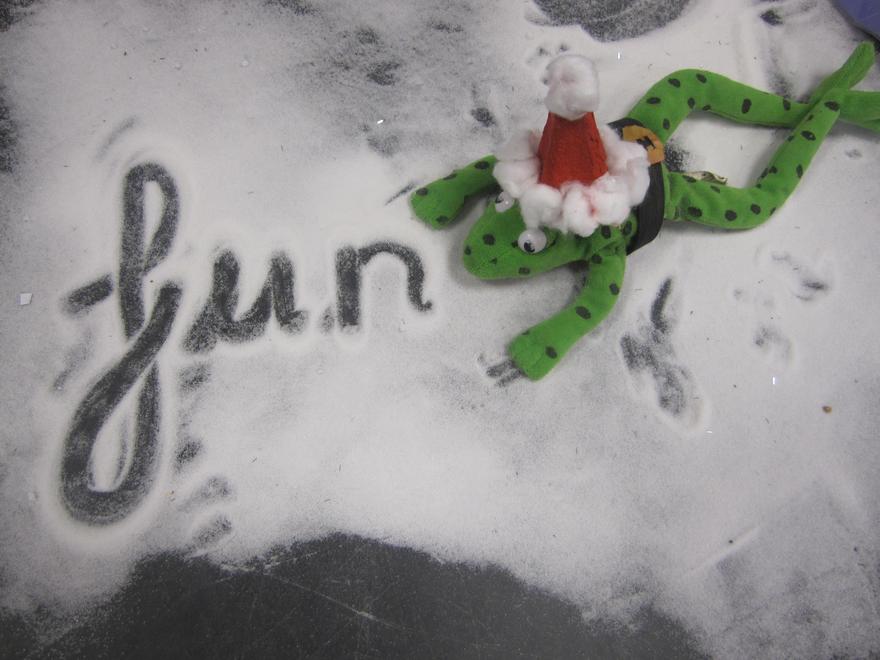 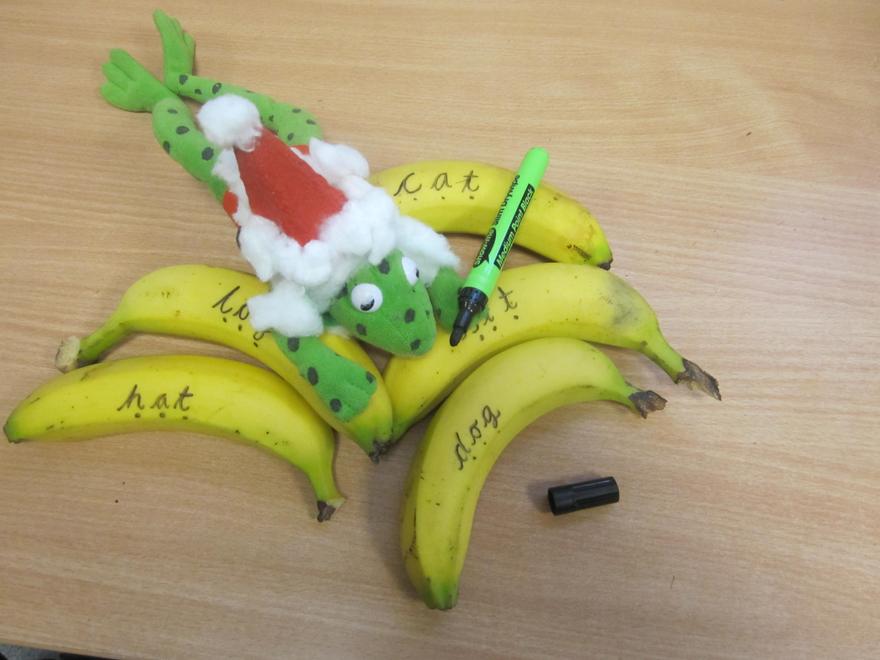 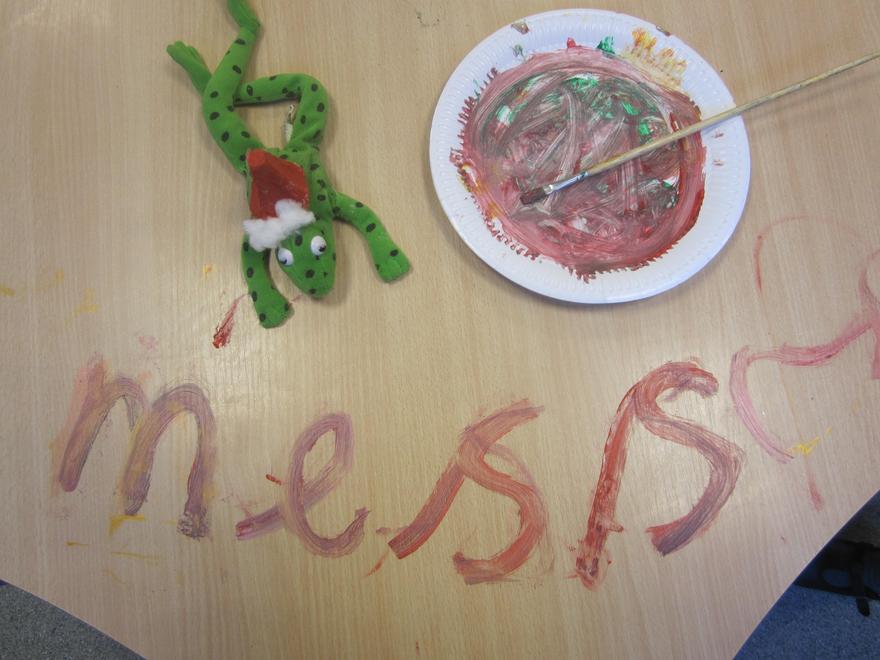 We have been learning to identify representations of numbers 1 -5 and learning to subitise or count to find out how many. We linked this to our topic by counting leaves, the Gruffalo’s prickles and bundling a given number of sticks together to represent Stickman. In the garden we have been using autumnal objects to sort, count and make patterns, children have been using chalk on the ground to make marks to represent numbers. They have been exploring Numicon and this has helped them to learn that numbers are made up of smaller numbers.

The children have been learning that circles have one curved side and triangles have 3 straight sides. They began to recognise these shapes on everyday items in the classroom and outside. We looked at Kandinsky’s circles and triangles paintings and the children had a go at painting their own. 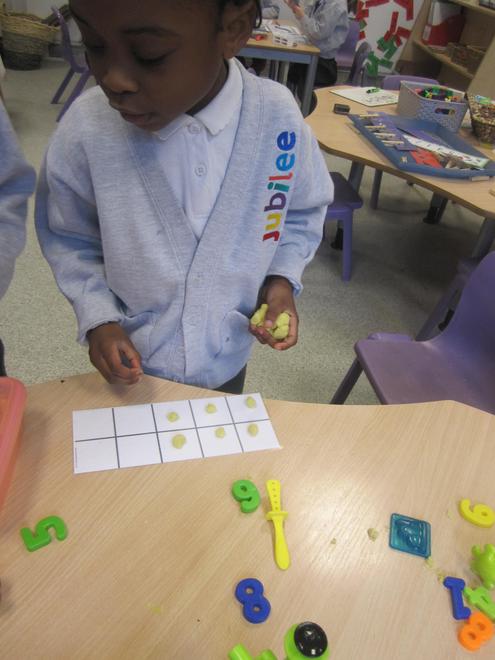 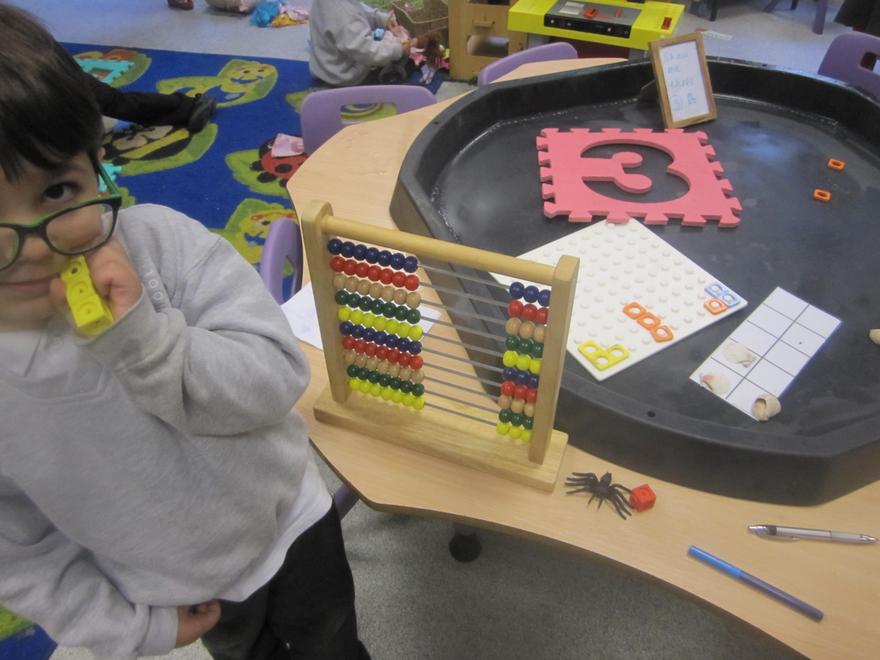 This term the children have been counting, comparing amounts and sorting objects in different ways. Scottish Owls have been using vocabulary such as ‘more’, ‘the same as’ and ‘fewer’ to compare objects.

The children have been using autumnal objects to count and compare. They enjoyed giving ‘big bear’ more food and ‘little bear’ fewer objects.

They used shapes to create pictures of people and places that are important to them. 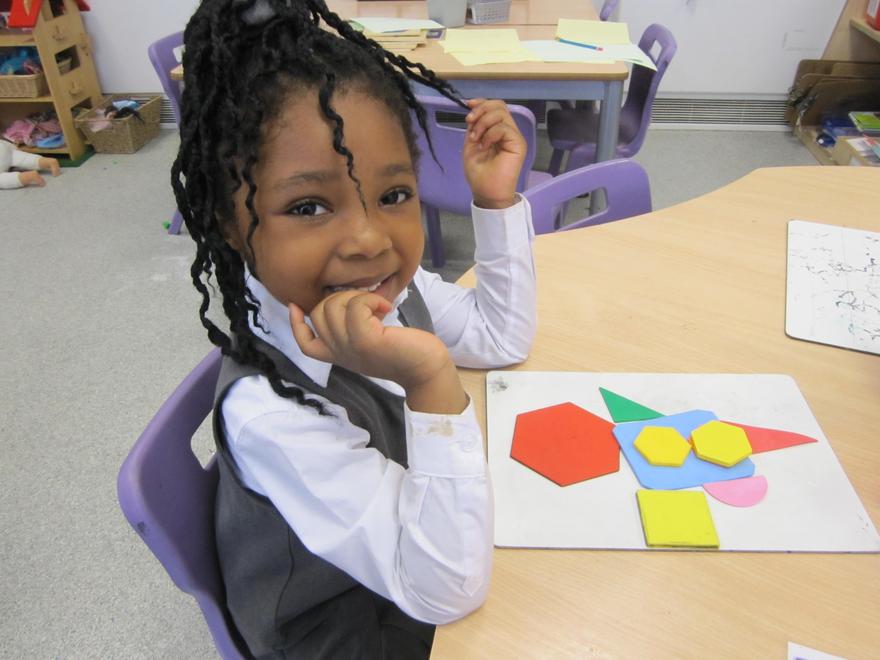 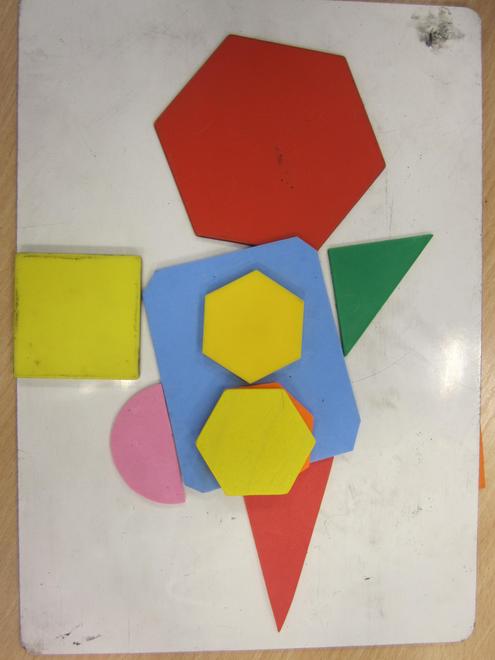 Scottish Owls have been introduced to Fred the phonics frog, he only uses sounds in each word. The children have enjoyed playing a listening game, they have to say what is in Fred’s bag by blending the sounds that they can hear to make the correct word. They have also been using their ‘Fred fingers’ to work out how many sounds there are in CVC words like ‘mat’ or ‘sit’.

They have been experimenting with mark making using shaving foam, sand, paint and chalk.

They have been learning new sounds and practising how to write letters, starting on the line and using lead-ins.

It has been fantastic seeing the children enthusiastically transfer what they have learned as a whole class to independently practise letters and sounds. 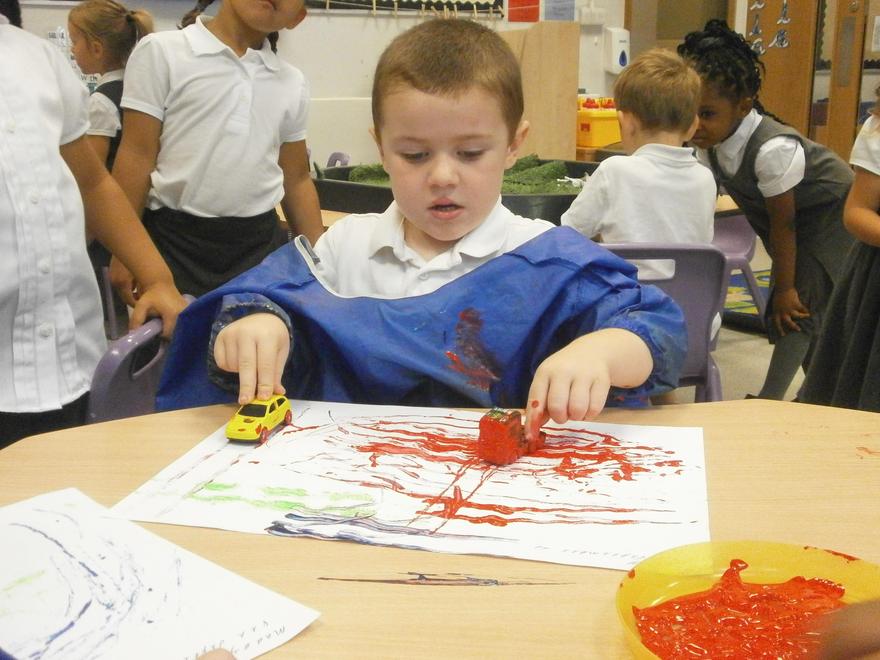 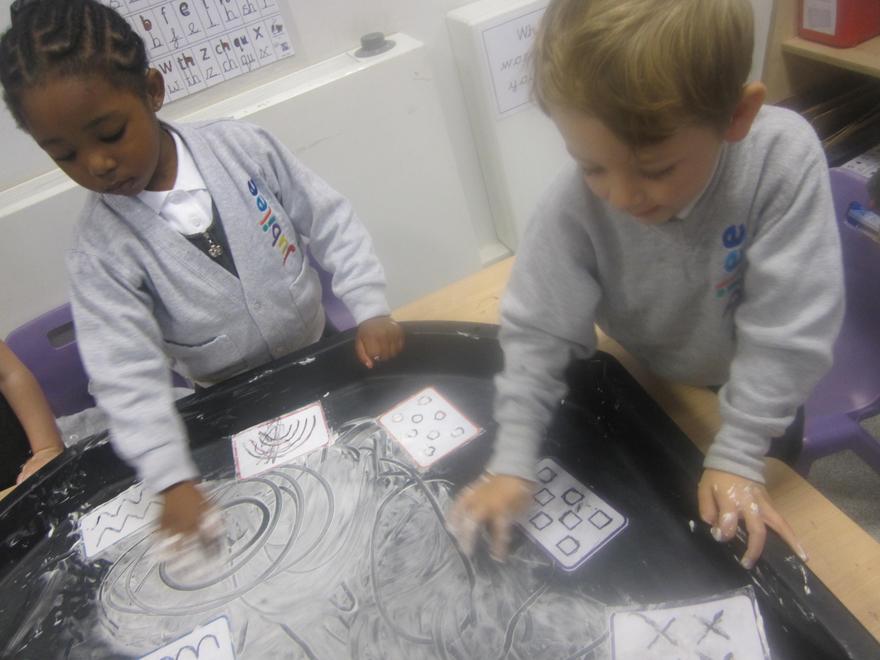 ‘Do you want to be friends?’ has been the perfect way to start our term. The children have been playing lots of name games to get to know each other. They have been thinking about what is special and unique to them.

Scottish Owls are doing a fantastic job of learning the High-Five rules, including putting others first and listening to one another.

Linking in with our topic, the children have been thinking about what they like and what they would like to be when they are older. They enjoyed a dress up day, which inspired the children to make emergency vehicles and discuss people who help us. 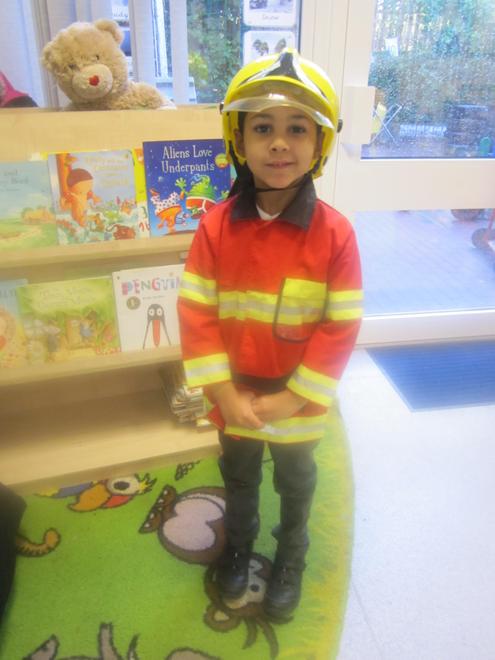 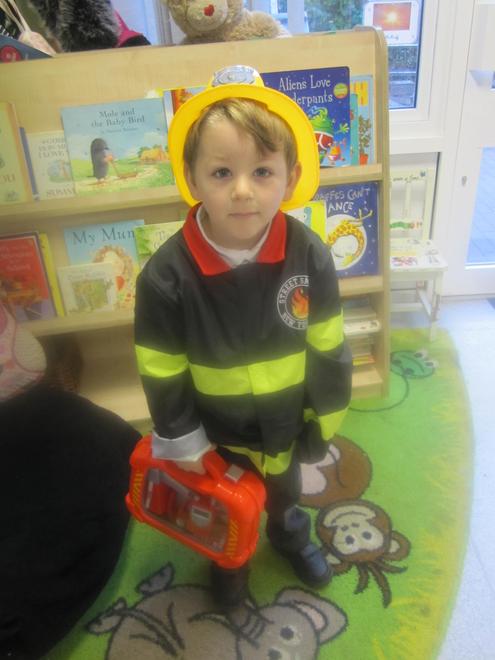 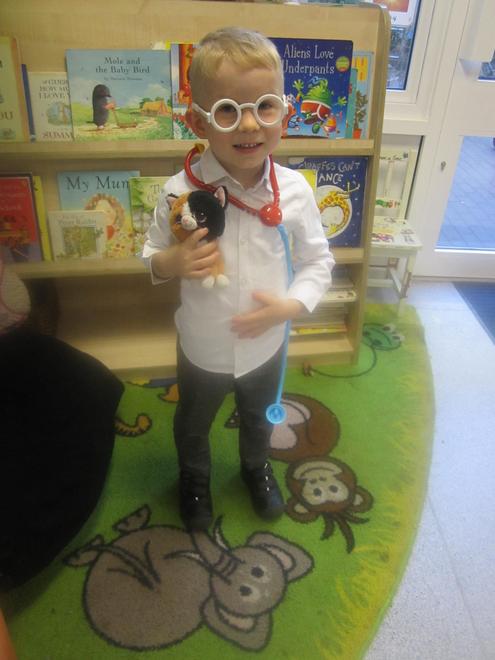 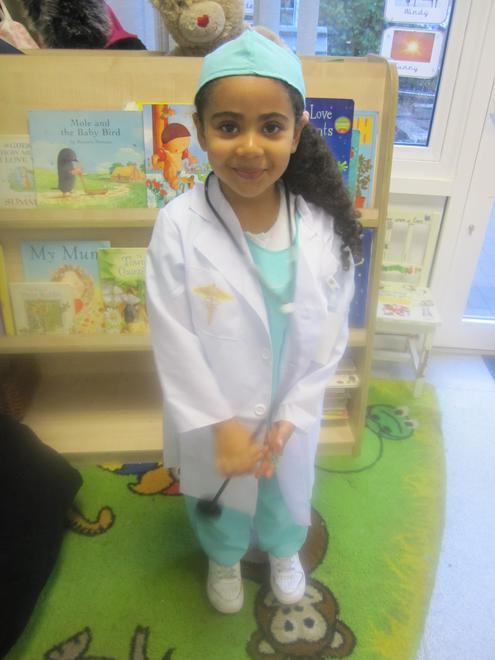