Year 4 have started a new topic, ‘Ancient Civilisations’. We have begun by exploring Ancient Sumer, one of the earliest known civilisations. We have tried writing in cuneiform symbols and written some free verse poems about Sumerians temples. We will continue with our topic in term 6 and will move our focus on to Ancient Egypt. 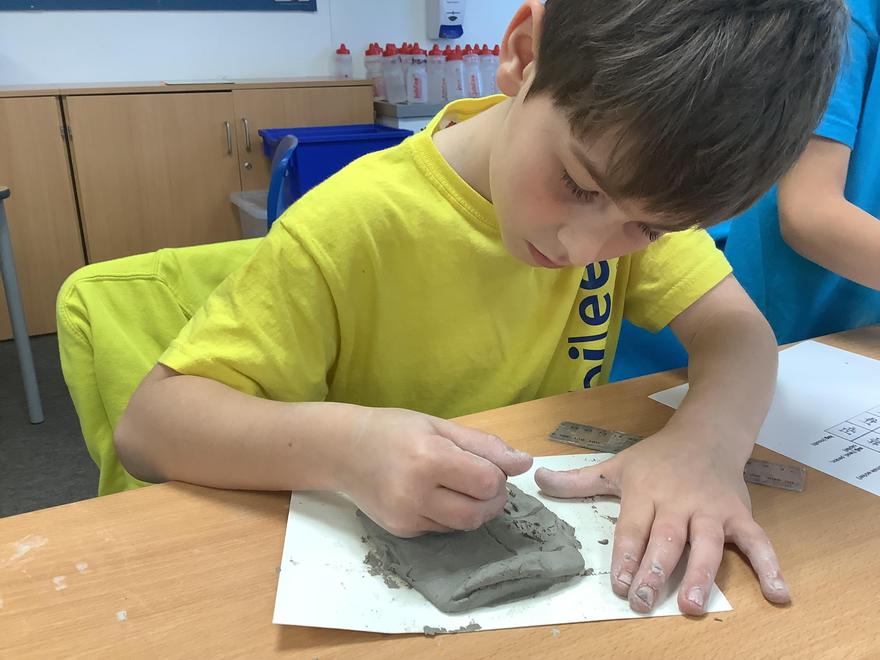 We began the term by writing a recount of our fantastic trip to the Science Museum in London. The class have produced some brilliant accounts to look back on. Recently, we have focused on free verse poetry. In Grammar, the class have learned about expanded noun phrases and they have applied their knowledge to their poetry writing. They have created some beautiful, descriptive pieces. We have been enjoying our class text, ‘The Time-Travelling Cat and the Egyptian Goddess’. We have already learnt some Ancient Egyptian facts that will help us in our topic work next term.

In Maths, we have finished learning about fractions of shapes and quantities. We have now moved onto decimals. The class have practised dividing 1- and 2-digit numbers by 10 and 100. We will continue learning about decimals next term.  We are still working hard to master our times tables. The majority of the class have mastered all of their tables and are ready for the times table check in June. It is really important the class keep practising.

We have been learning all about electricity. We have learned the components that make up a circuit and had a go making our own circuits. We have identified conductors and insulators, and also thought about how to be safe with electricity. 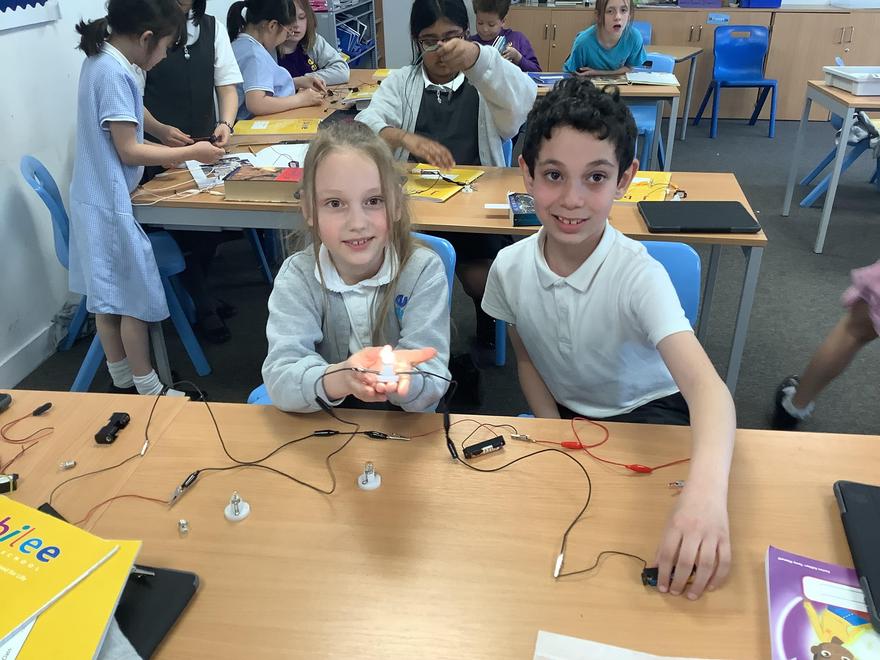 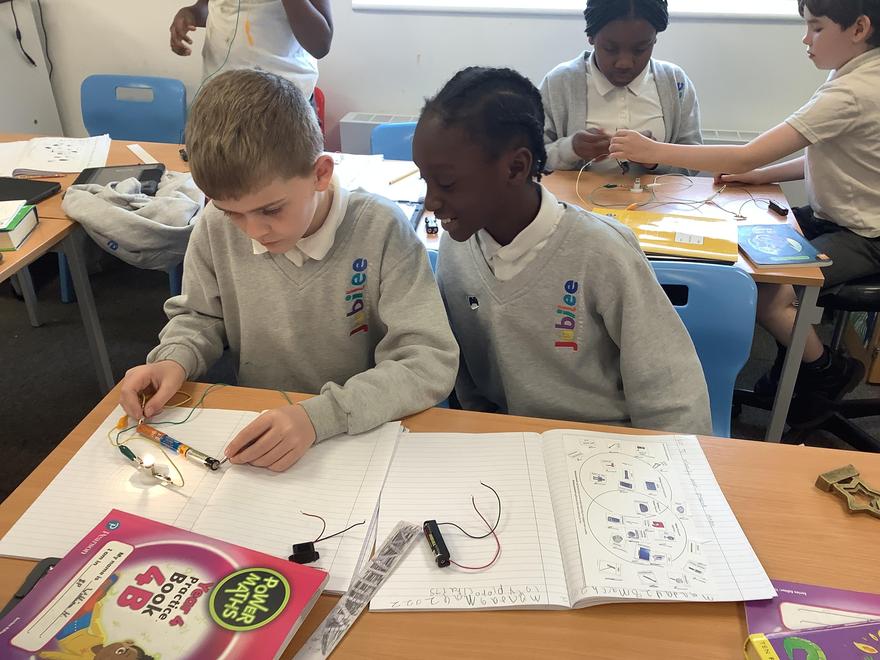 We had a fun start to the term when we visited the Science Museum in London. We saw lots of fascinating objects, and some gross things in the medical exhibits! The class enjoyed seeing the show, ‘It Takes Guts’ which consolidated our learning about the digestive system. One of the highlights was when the speaker showed how carbohydrates release energy by using flour and a blowtorch! 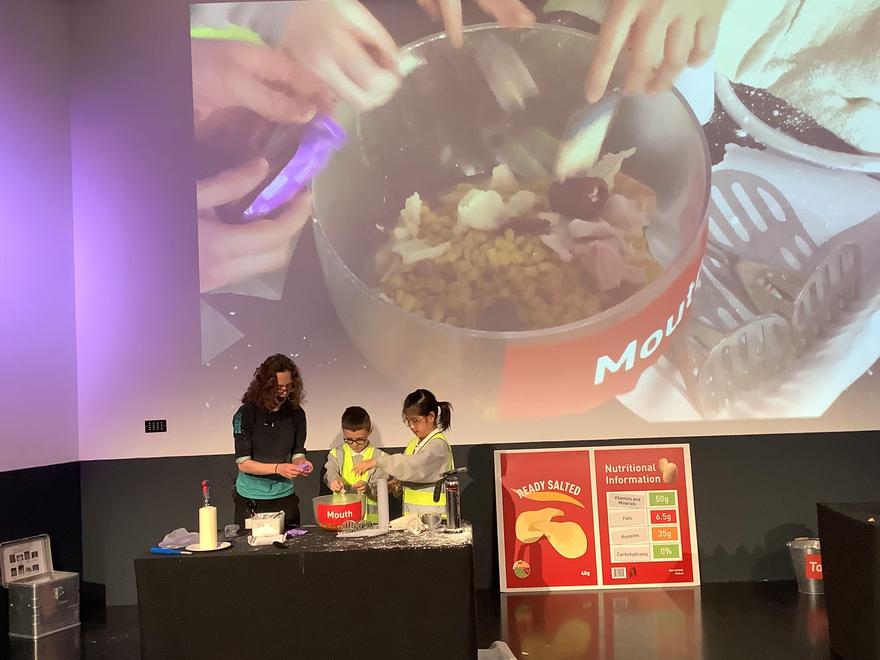 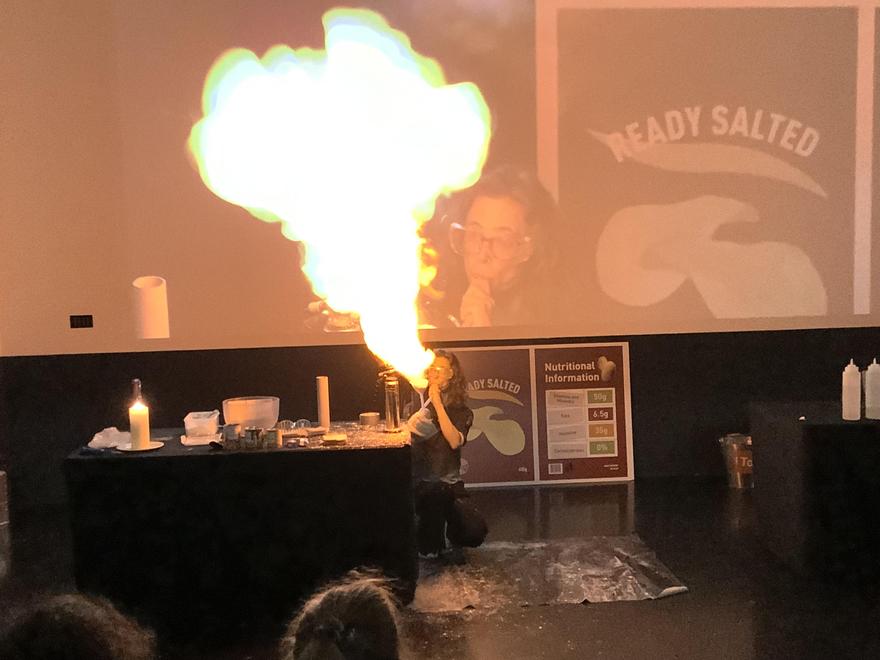 The class have enjoyed our weekly djembe lessons. The children are getting increasingly confident playing different rhythms and have also liked experimenting with other percussion instruments. In PE, we have been playing cricket and continued with swimming. The children are excited to celebrate the Platinum Jubilee and have been practising learning a traditional British dance. We have had lots of laughs learning the Cumberland Reel! 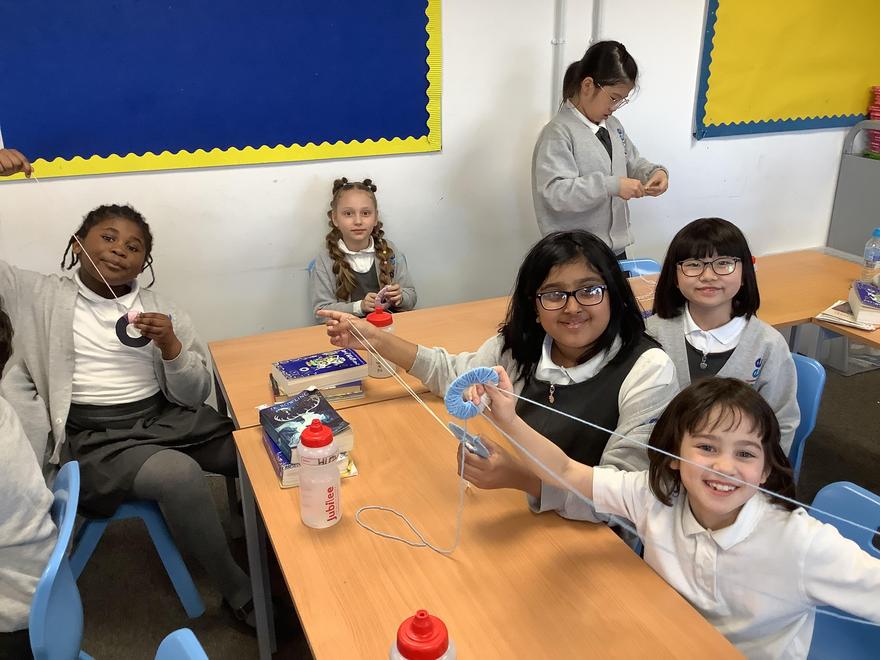 One of our main focuses for English this term is narrative writing. The children have had the opportunity to use their creativity to craft their own stories. The final stories they are working on are fantasy narratives set in the digestive system. We have thought about all the sights, sounds and smells you might experience in the digestive system to improve our descriptive writing. The class have also learnt how to punctuate direct speech and are incorporating this into their stories.

In Maths, we have explored how to measure the area of rectilinear shapes. We have now moved onto fractions. So far, the class have focused on finding equivalent fractions. We will continue learning about fractions next term.  We are still working hard to master our times tables. It is really important the class keep practising so they know all of their tables before the end of the year.

We have been exploring our Science-based topic across different areas of the curriculum. The class have learnt about all the organs in the digestive system and their key functions. We have also studied food chains and the class became competitive trying to create the longest one possible! 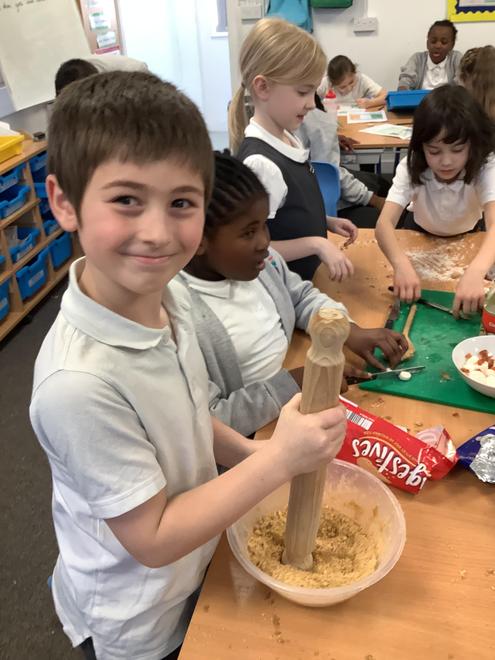 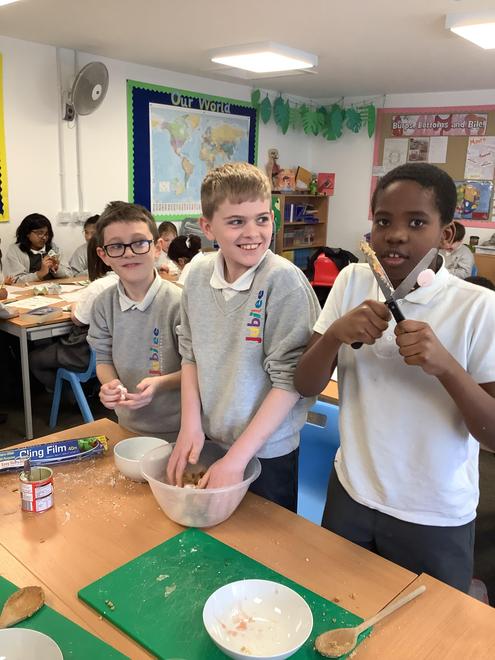 In RE, the class have been learning about forgiveness and why Christians celebrate Easter. They have practised acting their section of the Easter story for the Easter service and love singing the songs.

The class have had a very creative term. They have been drawing, painting, crafting and making pom poms. For St Patrick’s Day, the class had fun making Fifteens, (a popular Northern Irish tray bake). It got very messy! We also enjoyed celebrating World Book Day and had some wonderful costumes. 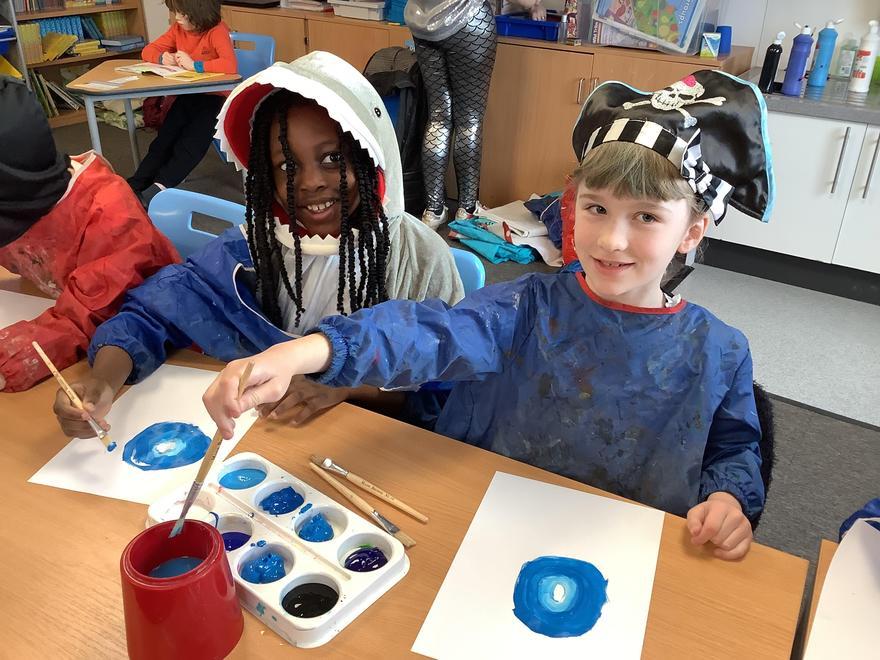 Year 4 have enjoyed getting stuck into their new topic, ‘Bottoms, Burps and Bile’ and finding out all about the digestive system. We have focused on the early stages of digestion, paying particular attention to our teeth. We have thought about the different types of teeth, their unique functions and how important it is to care for our teeth. The class created some brilliant clay model teeth! We look forward to continuing with our topic in term 4. 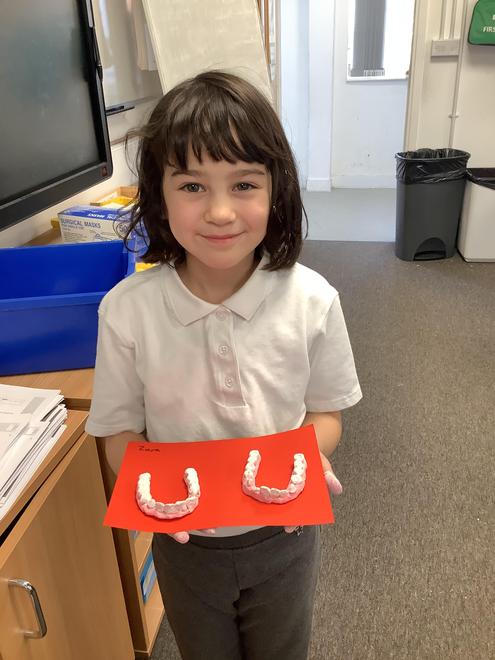 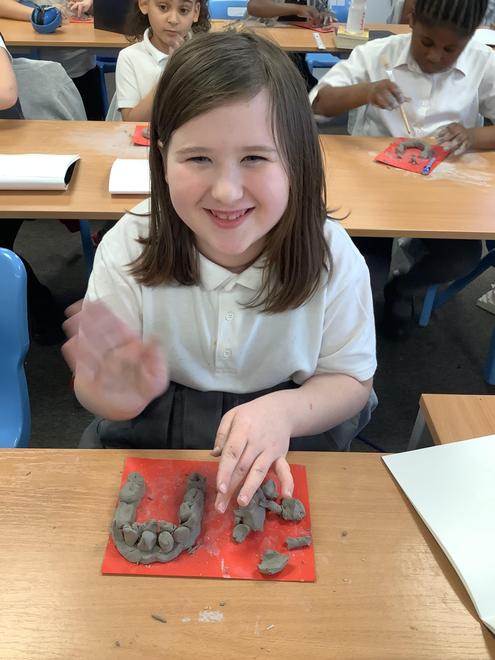 The children have enjoyed sinking their teeth into our new class text, ‘Demon Dentist’ by David Walliams. We learned about persuasive writing, and wrote letters to the main character, Alfie, to convince him to take better care of his teeth.

We have also spent time researching and creating fact files about countries we have a connection to. As a class, we cover most of the world! 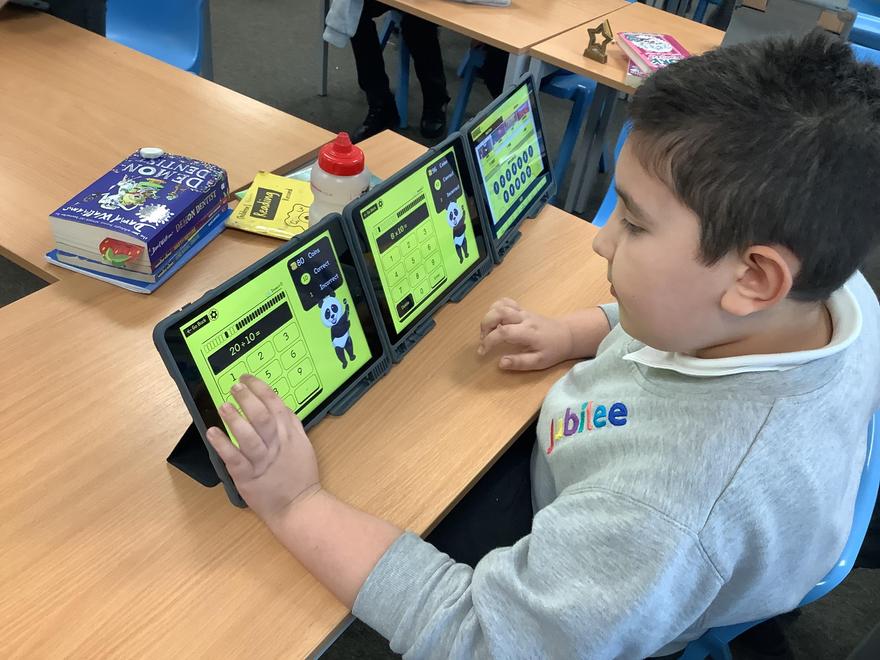 Our topic is Science-based, so we have had lots of time to focus on Science this term. The class have explored the structure of teeth and why different animals have differently shaped teeth. The children particularly enjoyed our egg experiment! We left eggs in vinegar for 24 hours to see what would happen. Eggshells and teeth both contain calcium that can be destroyed by acid. The eggshells turned soft after sitting in acid, just like our teeth can be damaged by acid if we don’t look after them. The children loved the bouncy raw egg which burst over Miss Erskine’s desk!

The class had fun taking part in the Intra Sports Competition. They played in a hockey tournament against Year 5. Even though Year 5 won, I was very proud of the good teamwork and sportsmanship demonstrated by all the children.

In RE, the class have been learning about Judaism with a particular focus on important foods. We have learnt about kosher and non-kosher foods. We learnt the story of Passover, and all about the Seder meal Jews still celebrate today. We had our own mini-Passover meal where the class sampled some Seder meal foods. There was a very mixed reaction to the horseradish! 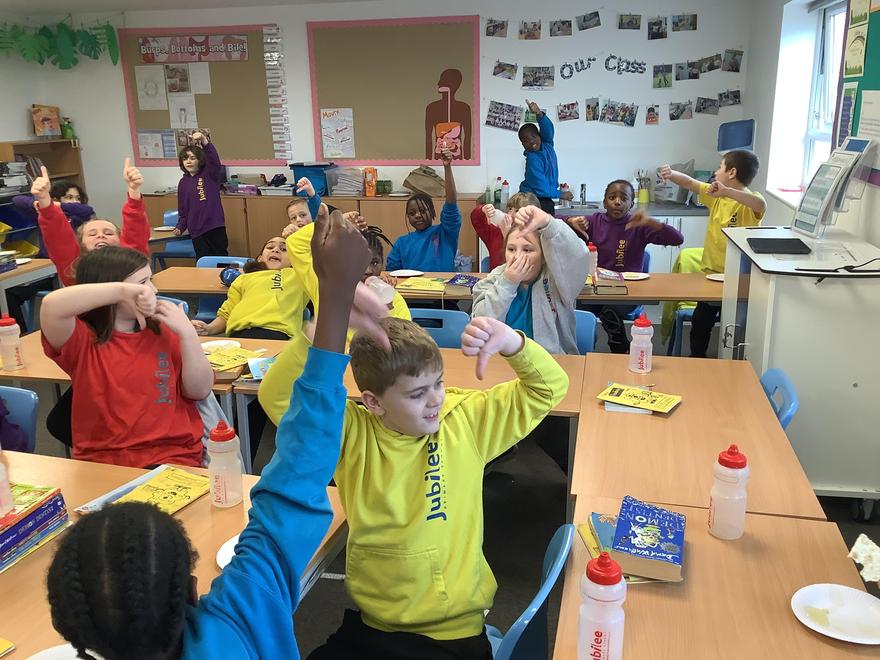 This term Brazilian Parrots have continued with their topic, ‘Misty Mountain Sierra’. We looked at how mountains are created by tectonic plates pushing together and why this can form different types of mountains. One type we explored in more detail, was volcanic mountains. We enjoyed creating papier mache volcanoes and had fun making them erupt! 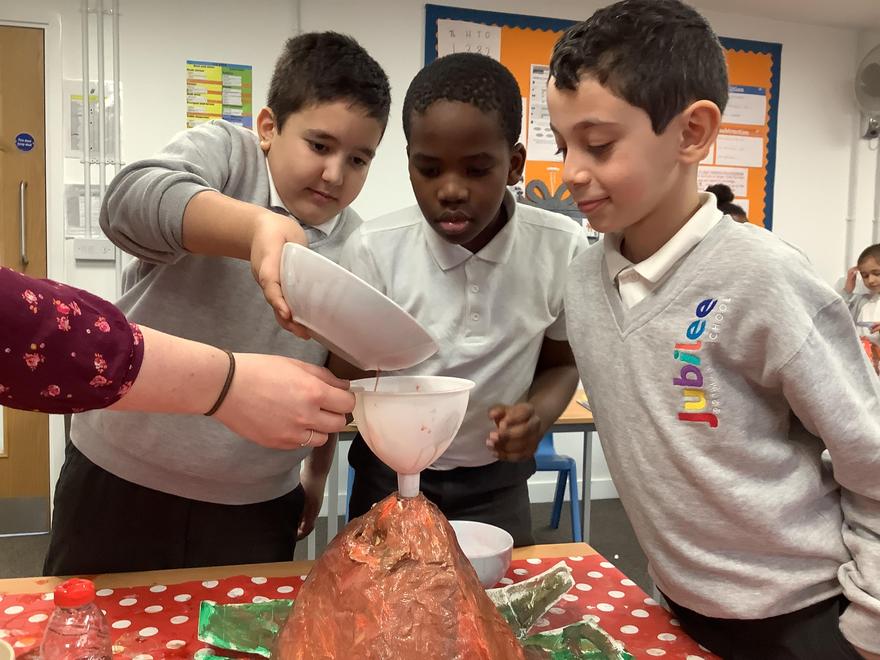 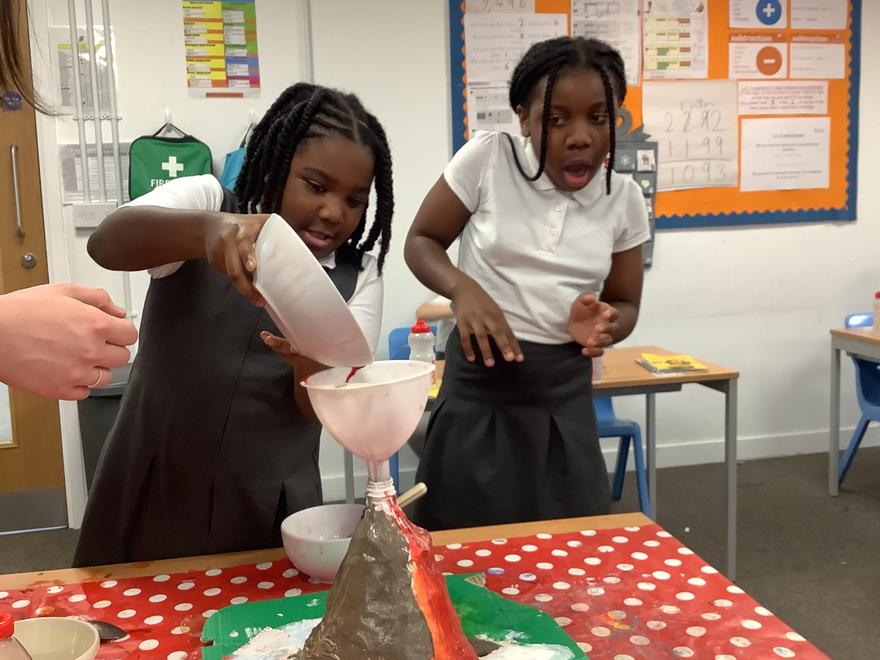 In English, we have explored various types of writing. One of our writing tasks was to create an information leaflet. As we have been reading ‘Running on the Roof of the World’ which is set in Tibet, we decided to research Tibetan animals. The children worked hard and created some fantastic eye-catching leaflets!

In addition to writing, the children had an opportunity to explore performing. For Remembrance Day, the class managed to memorise the poem ‘Longest Day’ and recite it as a group. We are finishing the term by writing some poetry of our own, but this time being inspired by Christmas. 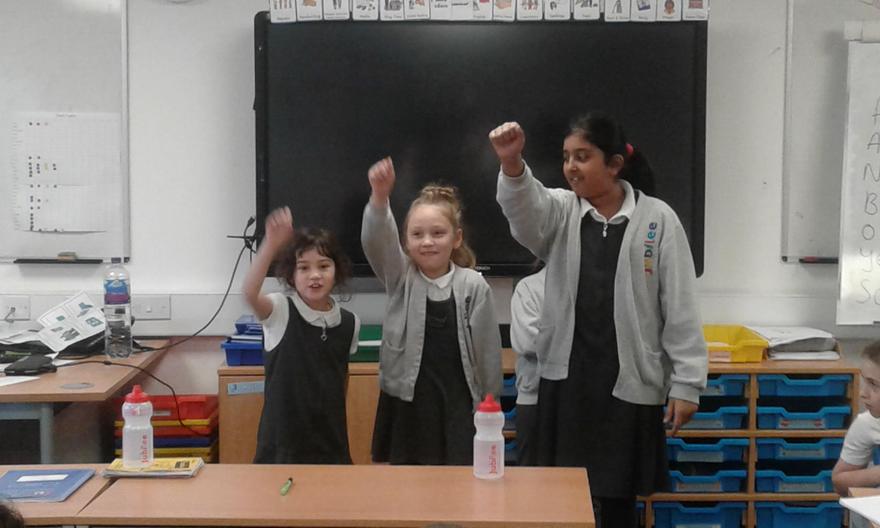 In Maths, we have been focusing on adding and subtracting four-digit numbers. We practised setting out our work in place value columns and exchanging. As we got more confident, we moved onto using bar models to tackle reasoning problems. We are finishing the term with some work on measuring perimeter.

The class are also practising times tables daily. We have had a couple of tournaments on Times Table Rock Stars. The girls won the first tournament, but the boys won the second tournament. Who will win the next tournament?

In Science, we have continued studying states of matter. Our main focus was understanding the water cycle. The class acted out the different stages and also enjoyed the catchy water cycle song. We linked our Science and English work to create an explanation text all about the water cycle and the four main stages: evaporation, condensation, precipitation and collection.

Linking to our water cycle work, the class had a virtual visit from a Water Aid speaker. Water Aid is a charity that helps people all around the world get access to clean water. The class engaged well with the talk and had a new appreciation for their easy access to water afterwards.

The class have really liked swimming over these past two terms. They are getting more confident week by week.

In RE, the class have been thinking about why Christians celebrate Christmas and the importance of different Christian symbols. We learnt about Christingles and how each part has a symbolic meaning. We made some Christingles that are brightening up our windowsills. 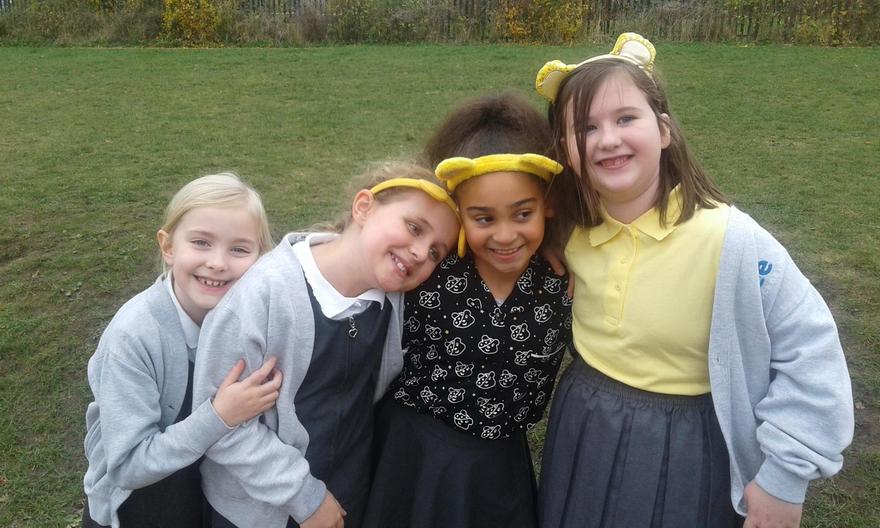 Esther and Aaliyah with their Christingle 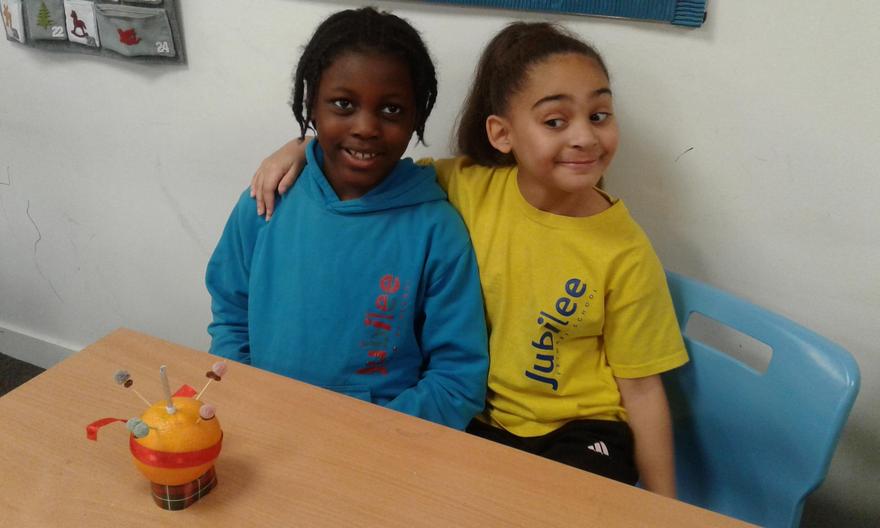 This term Brazilian Parrots’ topic has been ‘Misty Mountains Sierra’. We have learned about mountain ranges around the world and famous mountains such as Mount Everest. We have become more confident with using atlases and have begun to explore how mountains are formed.

In English, we have been reading ‘Running on the Roof of the World’. The children have found it interesting finding out about life in Tibet and the challenges faced by Tash and Sam. The class worked well in groups to story map what has happened so far and used these story maps to retell the events in their own words. We will continue with our text in term 2. 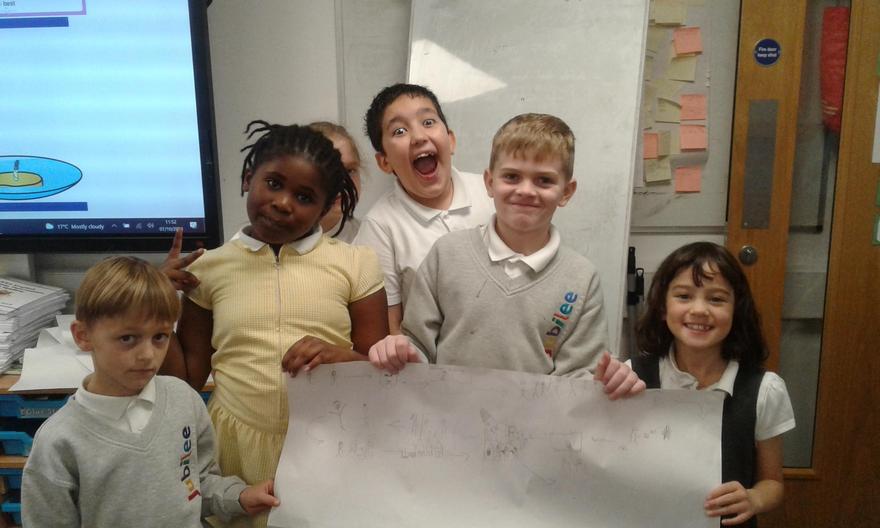 Linking to our topic, the class researched the life of Edmund Hillary, the first man to climb Mount Everest. We discovered how he persevered and worked hard to achieve his dream of climbing the highest mountain in the world. We used all of the information we researched to create some brilliant biographies.

In Maths, we have been focusing on place value. We have concentrated on understanding the value of digits of numbers up to 10,000. We have used different resources to represent the value of digits, such as place value counters and base 10 equipment. The children have practised rounding, comparing and ordering numbers. We also regularly practise our times tables and are trying to get faster at recalling them! 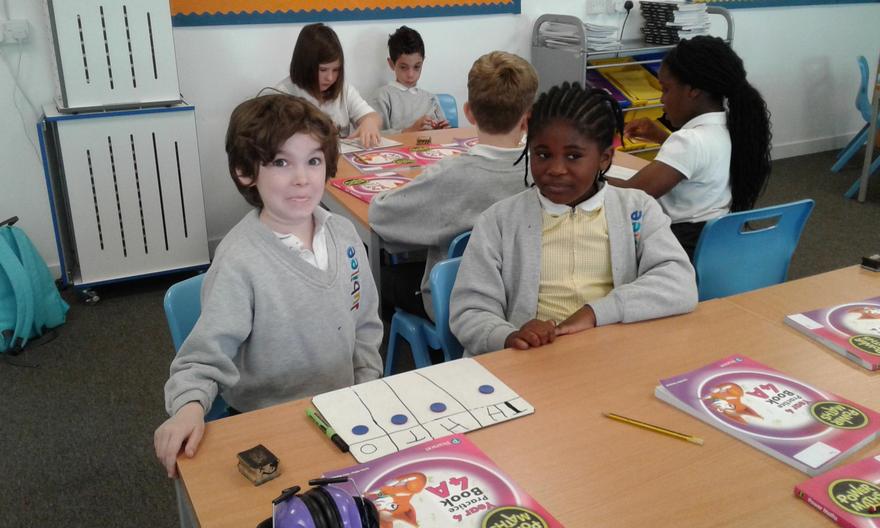 In Science this term, we have studied states of matter. The class have sorted materials into solids, liquids and gases. We have looked into how particles behave in these different states and enjoyed acting it out. The class particularly enjoyed investigating whether gases had weight and experimented by removing the gas from fizzy drinks. We have begun exploring the processes of evaporation and condensation and will continue with this next term.

Our topic, ‘Misty Mountains Sierra’, runs over two terms. The children have enjoyed learning about various mountain ranges and the features of mountains. We used atlases and maps on learn pads to identify mountains around the world and closer to home in the UK. In Art, children enjoyed developing their drawing skills to sketch mountains such as Everest, K2 and Ben Nevis. We have been discovering the different types of mountains and how they were formed. We will continue with this in more depth next term. 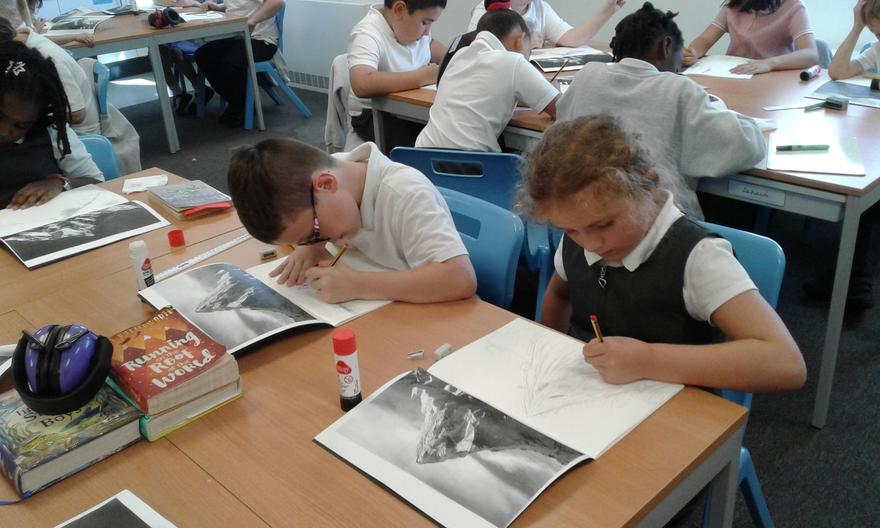 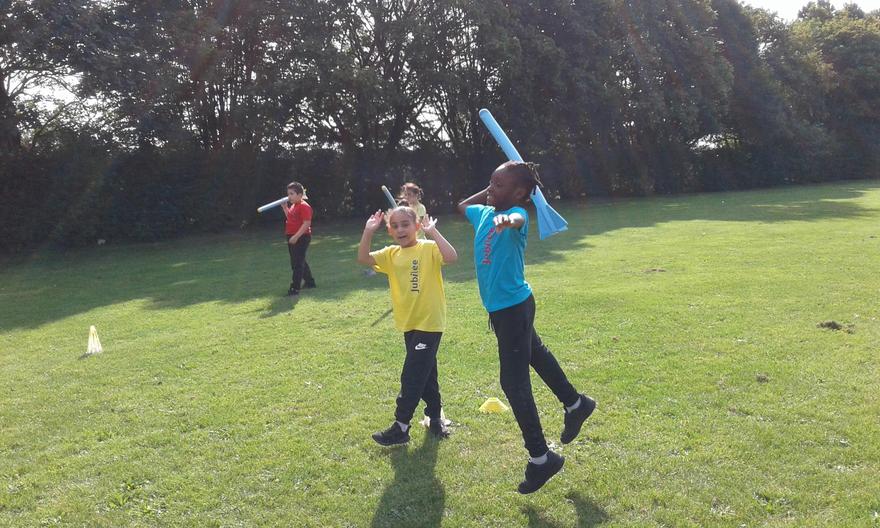